Aesop's "The Donkey and the Lap Dog"

It's my opinion that everyone growing up should be given a copy of Aesop's Fables.  They come to us from the mid 6th Century BC and are attributed to the wise slave Aesop, but over the centuries have probably been worked on and embellished by any number of people.  The wisdom in these stories holds true to the modern day, and can be seen anywhere there are people, low to high.

Today, let's consider a story by the name of "The Donkey and the Lap Dog".

T
HERE was once a man who had a Donkey and a little pet Dog. The Donkey worked all day in the fields and slept in the barn at night. But the Lap Dog frisked about and played, jumping in his master's lap whenever he pleased, feeding from his hand, and sleeping by his bed at night.
The Donkey grumbled a great deal at this. "How hard I work!" said he, "and I never get any pay but blows and hard words. Why should I not be petted like that wretched little Dog? It may be partly my own fault. Perhaps if I played with my master as he does, I too might be treated like him."
So the Donkey pushed his way into the house, and jumped up on his master's knee, putting his forefeet on his shoulders and giving a loud bray.
The master, almost deafened by the noise and in danger from the great clumsy creature called out, "Help! help!" and the servants, running in, drove the Donkey out of doors with sticks and stones."

Do YOU know any Donkeys? 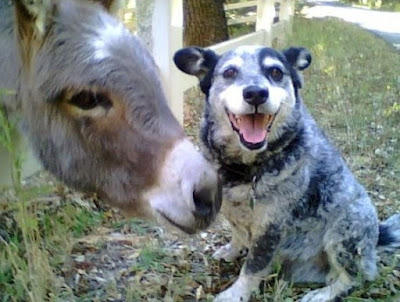