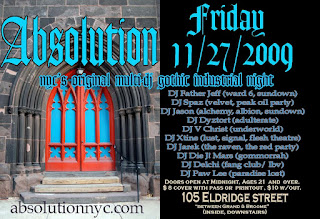 It seems that ABSOLUTION has come to rest after the 6 week "venue tour" we have gone on, which has been exciting and fun. Patrons have watched us pick up speed as we did one night each at the old Annex(Doghouse Saloon), China 1, Fontanas, Uncle Charlie's 87, and now back to Fontanas. Dizzy? We were, lol! We had a wonderful time, and we received a lot of positive feedback about the various venues. Some seasoned veteran DJs and club patrons gave us their input, and we've decided that Fontanas is a good choice.

FONTANAS is a rock club which promotes other branches of the rock n roll tree- punk, metal, etc. They gladly accepted us, a Goth/Industrial night, and treated us well in the process. We will be at FONTANAS for the next two Fridays in a row, starting at 12 Midnight. Coincidentally, it's located at 105 Eldridge St...LOL!

Even seasoned promoters like Jason and Myself who have been active for well over 10 years in the Goth/Industrial scene have a hard time changing venues so much. But we decided to take it upon ourselves to do it. Sometimes you have to just "work your way in"...it's like a game of Tetrus. I love thinking "outside the box", and this is a perfect example.

A lot of the promoters of old have left NYC because it's much harder to do business here and stay ahead financially. There are only four Goth/Industrial parties now being held which have any promoters who have lineage from the great old parties of 10 years ago, DefCon @ Pyramid, Ward 6 @ Le Poisson Rouge(a monthly), Contempt @ Identity(a monthly) and our ABSOLUTION. Only DefCon and ABSOLUTION have achieved the usual norm for parties, a weekly status. It's no coincidence- the promoters of old NYC have proven themselves time and time again in an environment so competitive that most would not be able to withstand the stresses.

When I first came to NYC, the club scene had a feeling of security, nobility and history at each event. All that was taken away with the changing economic climate of nightlife of the recent years. Now, we hope to provide such an environment by booking DJs who represent the parties of old. For if not us, who is there who remembers?
Posted by Xtine at Tuesday, November 24, 2009