MOTHER, a Nightclub created by CHI CHI VALENTI,raised the bar for all underground nightclubs in NYC, challenging producers to see that nightclub production could actually be an art form.

My first real impression of New York Nightclubs was received when I was randomly hired as a "method go-go" artist at this club.  I had been to NYC nightclubs before and liked them but was not overly impressed.  MOTHER and CLICK N DRAG were totally different.

The doorperson was in actuality KITTY BOOTS, a lauded fashion designer who doubled as wardrobe mistress for the dancers.  The basement of MOTHER was stuffed with her creations, and before the event she would go in and pick out something for the dancers to wear.  Because MOTHER was my first experience with working for an NYC nightclub, I thought it was normal for nightclub performers to have not only a large dressing room but a large stock of costumes and someone to make them look fabulous!  Little did I know that this is far from the case with MOST other clubs, LOL.

The video displays(yes, they had someone to just do video displays) were done by noted visual artist ROB ROTH.  And the staff in the club were all hand picked as a casting director would choose in addition to being able to do their jobs.  Needless to say, when you combine these elements it makes for a Party on a very high level, far higher than most other nightclub productions.  It was like being part of a play or performance art piece rather than a club night. This production was actually run WEEKLY, for four years.  So anyone who is operating under the misconception that nightclub parties are "too hard to do on a weekly basis"...how about a party that needs new visual displays, costumes, dancers and performers EACH WEEK?  And this was done with aplomb.

There was a strict dress code for this party- NO blue jeans, NO white button down shirts, NO baesball caps WHATSOEVER.  I remember going there with a CBGBs employee and even having HIM turned away because he was wearing blue jeans.  Someone not well versed in how to run a nightclub would probably think this was not the best business policy.  Nothing could be farther from the truth.  Because of the dress code,  people went out of their way to dress up for this party, and come out to this party, knowing that there wouldn't be any disagreeable people there.   People worked for hours and hours on costumes for this party.  The dress code stimulated business not only at the club but for related businesses like costume shops, underground fashion designers, etc, and made NYC a much more fun and fashionable place.  It became a haven for artists, photographers and other "artsy" types.

So tonight is the night- I'll see you all at CLICK N DRAG! 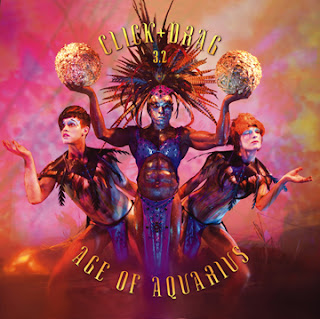