Here is a list of the distinctions ABSOLUTION has garnered in 2010.  We hit the ground running last New Years, as it marked the beginning of our weekly contract on Fridays with club UC87 to produce one Gothic/Industrial themed party per week, and sometimes two in the case of a Sunday holiday party such as Halloween.

2) We had about 30 bands play throughout the year, being the only Goth/Industrial themed night in the NYC area and it's boroughs that featured at least one band per week.

4) We designed a website(coming soon!) that is an online library and repository of information about previous Goth/Industrial events in NYC, restoring the rich history of this scene to the people who created it and took part in it and those who wish to find out about the history of this scene, dating as far back as 1996.

This major effort revitalized the Goth/Industrial scene in NYC and drew attention to it from other music fans and producers.  It provided a welcome influx of interest about this subject and gave music and fashion fans the option of attending and celebrating this scene on a weekly weekend basis.  Unwilling to allow a great tradition to fall into disrepair and unafraid of naysayers, we will continue on our path into 2011!  There are many options open to us now and there are many other works in progress, so stay tuned for more news.  It's a good time to be a Goth/Industrial fan, DJ or musician in NYC;) 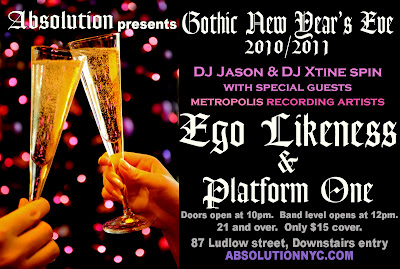